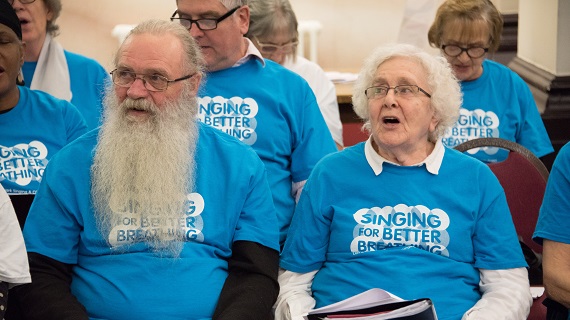 Chronic obstructive pulmonary disease (COPD) is an umbrella term for of a number of specific airway conditions including bronchitis and emphysema. There has been a growth of interest in the potential value of participation in singing groups for people with CODP and other respiratory illnesses. The Centre has produced some exciting findings relating to the impact of regular group singing for people with breathing difficulties, in addition to designing and developing the Singing for Better Breathing Training Resource. These are all listed below:

Singing and COPD: Randomised Controlled Trial with Embedded Interviews and Development of a Resource

(Papers are currently in press)

This research comprised three components. A single-blind, randomised controlled trial (RCT) tested whether a 10-week regular weekly group singing programme led to improvements in COPD-specific health status when compared to treatment as usual. Twenty-four individuals completed the follow-up. Measures at 12 weeks (COPD assessment test, SF-36 health status, spirometry, and functional exercise performance) showed no significant difference between singing and control groups except for one item on the SF-36 suggesting that singers were less limited in their activities post-singing.

In-depth interviews were conducted post follow-up with 5 individuals in the singing arm, which asked about their experiences of living with COPD and also of the singing programme. An Interpretive Phenomenological Analysis approach was applied to the data, which identified 5 themes, covering: the restrictive impact of COPD, improvements in self-efficacy and control over COPD following the singing; positive social connections in the group; positive emotional and cognitive changes; and the value of breathing techniques. These are all changes less well captured in the standardised measures used in the RCT and demonstrates the value of including different ways of collecting data in this area of research.

Building on theories of self-efficacy and self-management, and in keeping with the interview findings, a resource was developed consisting of a DVD of 13 films and accompanying booklet for participants to use between singing sessions and beyond the project. Feedback in the form of diary entries and telephone interviews suggested that the resource was popular and positively viewed and used as an exercise to promote breath control. The resource is available below.

The Singing for Better Breathing Training Resource is a self-management resource to improve health – designed to support those wishing to improve and maintain health through singing. It may be used to complement membership of a singing for health group, and as an individual resource.

Please click on the link below to view the “Singing and People with COPD” training resource:

The Lambeth and Southwark Singing for Better Breathing Project

This was a follow-up to the East Kent study to further test the feasibility of setting up a network of community singing groups for people with COPD to run weekly over the course of ten months (September 2015-July 2016) but in a very different context. A total of 60 people were recruited to four groups and assessment included a battery of validated questionnaires with the St George’s Respiratory Questionnaire as the primary outcome measure. Lung function was also measured by spirometry and a walk test. Singing was led by two experienced facilitators.

At follow-up, 44 participants completed questionnaires again and 42 completed the lung and exercise assessments. 37 participants also took part in a semi-structured interview to gather feedback on their experiences. Measures showed a significant improvement on the St George’s symptom scale, but little change on the lung function and walk tests. Participants reported fewer bad days and accounts from interviews were consistently highly positive.

This research was a feasibility study which set out to gauge the acceptability of singing groups for people with COPD and to explore any potential benefits to health. 121 individuals volunteered to take part and attended lung function (spirometry) tests at baseline and also completed quality of life health questionnaires. Six singing groups were set up in East Kent and members took part in weekly 90 minute sessions of singing over 30 weeks, which included posture and breathing exercises and were led by experienced musicians. Questionnaires were repeated at mid-term, and both questionnaires and lung function measures repeated at the end. Willing participants were interviewed about their experiences.