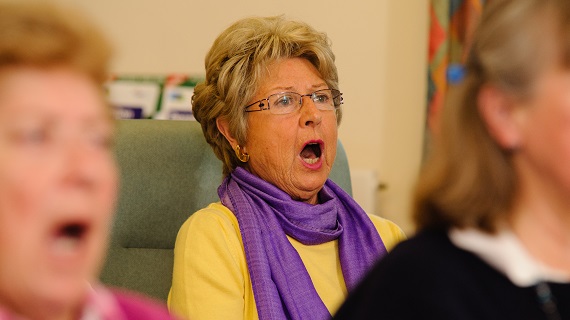 Carers Create is an ongoing community arts engagement programme for carers of people with dementia, their cared-for and the wider community.

The project is delivered by Music4Wellbeing Community Interest Company and has been evaluated by the SDH Centre. Starting in 2008 with one group in Herne Bay, Carers Create now runs four regular groups in east Kent involving over 250 people. The central activity is singing but the groups have also elected to engage in additional music activities, such as drumming and song-writing, and in other arts media, such as story-writing and crafts.

An evaluation of the activities between 2015 and 2017 and their effect on participants’ physical, mental, social and cognitive wellbeing provides an argument for embedding the arts into mainstream management to improve the quality of life of carers and the people for whom they care.

The research ran in collaboration with members of the University of the Third Age (U3A), and focussed on carer perspectives of the groups. Carers have taken part in focus group discussions and findings have been reported in the Journal Dementia.